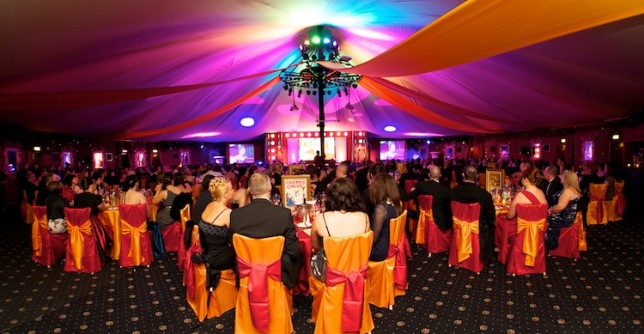 The last 24 hours of November were strange ones filled with peculiar co-incidences. I was dispatched to the UK Event Awards in a bid to retain “The Green Award” which Maximillion won last year in Manchester. This year’s awards were hosted at the magnificent Wembley Stadium; the entrance was more like the front of T5 with a complicated series of escalators whisking you to the top level where we would enjoy our drinks reception and dinner.

Here I was immersed into the first peculiarity of the day, a record breaking attempt at the world’s largest number of people to simultaneously chink their champagne-loaded glasses and say “Cheers”. What an ordeal that turned out to be with fastidious attention to detail from the Guinness officials requiring exhaustive rehearsals rendering the experience more irritating than scintillating.

The rest of the evening went according to plan and we did indeed retain our “Green Award”,a moment of genuine satisfaction. I escaped outside pitchside for some fresh air and reflection. Was there any irony in the huge array of powerful lights hovering directly over the pitch, leaving a big fat carbon footprint? Are we running out of natural light along with all our other resources? Strange!

The next day I had the customary post-awards hangover to deal with before heading home via the aforementioned T5. Yes, “think of the carbon footprint you hypocrite” I hear you say.  Well sometimes you just don’t have the time but that’s another blog for another day (comments below most welcome).

The next oddity was to find Brian May was on the same plane. Odd, because that night I had been invited to go to the opening night of the stage production of “We Will Rock You” in Edinburgh and here was the man, the legend, on his way to perform at it, and here I was on the same plane. It couldn’t really get any better…..but it did (use Clarkson tone of voice here). Towards the end of the flight the Captain came onto the intercom for his pre-arrival preamble: “Ladies and Gentlemen, as we approach Edinburgh I’d like to update you on the weather. You will all be pleased to hear that the thunder and lightning, very very frightening has passed replaced by sunny spells and light winds.” Much laughter from all passengers as the Captain continued and then finished with “so without further ado, I’d like to hand you back to the cabin crew, as the show must go on!” More passenger laughter. We landed safely and I disembarked into the terminal to find myself marching directly towards a static and god like Brian May complete with enormous rock star hair. All self-control evaded me and I found myself blurting out “I’ll see you tonight” to which he rather meekly replied “Oh, alright then”.

So the show did go on and it was a fabulous one at that. The peculiar co-incidences turned full circle near the end when one scene reflected on Queen’s Live Aid performance at Wembley Stadium in 1985. I might not have been there in 1985, but I was there the night before! And then I shared a plane with Brian May and then I had a conversation with him and then the Wembley scene and then of course he comes out to close the show and were all on our feet doing that “were not worthy” bowing thing.