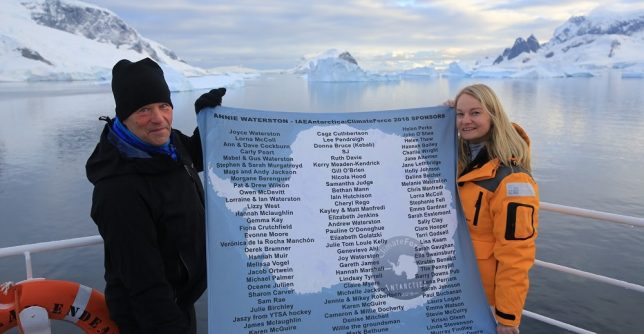 One of our longest standing Event Team members – Annie Waterston – has just completed an Antarctic Expedition in support of ClimateForce. In her guest blog this month she shares this fantastic experience with us:

In November 2016 I listened to a presentation by Robert Swan, the first man in history to walk unaided to both the North and South Poles. I had pretty much never thought of Antarctica before that moment or even considered how vitally important it was. I listened to him passionately tell his story of his mission to save Antarctica from melting, and from future exploitation in the form of fossil fuel companies. His message sparked something in me as I had just spend the last 6 months of my life in a wheelchair and crutches having sustained a nasty leg break on a trampoline. As a PE teacher, I was desperate, I needed something to cling on to, something I could get involved in without needing to run or jump or throw to achieve it. So when he ended with these words from Goethe;

“Whatever you do, or dream you can, begin it. Boldness has genius and power and magic in it.”

I dreamed right then and there that I would be part of the solution. For me it was a bold move, and from that moment on, I set the wheels in motion so that I would be part of a 90 strong team of participants from around the world setting off on an expedition to Antarctica with Rob Swan and his foundation 2041. A huge thank you to all that supported me, including Maximillion.

In March 2018, we set sail from the Southern tip of Ushuaia. We were heading to one of the last wildernesses on earth.

Antarctica was pristine. It was as if a giant artist had wandered through the Southern Ocean and set to work on creating art out of icebergs. I always thought icebergs would be plain white, I was wrong. The blues and sometimes greens that shone from them were mesmerising. I kept thinking there was a treasure chest of precious gems tucked away inside.

Humpback whales were abundant. They were huge graceful giants, working together to hunt for krill. The eerie, ancient sound of them communicating was my favourite Antarctic noise.

Penguins were everywhere, so cute and clumsy on land yet so agile in the water that they can outswim a chase from a predator – the leopard seal. The penguins were such curious creatures and were often waddling over, face planting and then having a long stare at you as if to say – you’re a funny looking thing!

I felt a real connection with nature and that is the first thing that Antarctica taught me – get people to disconnect from technology and connect with nature so that they will feel a need to protect it.

This was the delight I felt at seeing my first iceberg!

And this was me truly connecting with the ocean by taking a polar plunge!

Climate Force 2018 Expedition
Throughout the expedition we were shown how Antarctica is such an important player in our understanding of the global climate crisis we are now facing and the crucial need for us to change to more sustainable ways of living. Rob and his son Barney told us horror stories from their South Pole Energy Challenge when they decided to walk 600 miles to the South Pole using only renewable energy. They used solar panels and biofuels, it was successful, even though Barney almost lost his toes to frostbite.  I admire the lengths that they went to to show the world that if renewable energy can work in Antarctica, the most inhospitable place on the planet, then it could work anywhere.

We were fortunate to have David Hone, the chief climate change advisor for Shell International, presenting to us and these lectures vastly improved my understanding of climate change and outlined seven solutions towards becoming carbon neutral as we move forward.

Climate Science
2016 was the hottest year on record and 2017 the hottest non El Niño. Pre-1960 carbon dioxide (CO2) levels in our atmosphere stood below 320 ppm (parts per million) and current levels are at 410 ppm. These temperature rises and CO2 emission rises have been linked to

Impacts Due To A Rise in Global Average Temperatures
The long term impact to be concerned about is significant sea level rise, but many hundreds of smaller impacts already underway are changing everything, from habitats of animals to crop yields in certain areas. The key to future sea level rise lies in Antarctica as the glacier ice is based on land and not already in the ocean like that of the Arctic. Scientists predict that if carbon dioxide emissions continue as they are, then Antarctica has the potential to increase sea level by more than 1 metre by 2100 and more than 15 metres by 2500. At the moment we are adding 107 million tonnes of carbon dioxide per day to the atmosphere.

“We can’t keep adding carbon dioxide to the atmosphere and expect nothing to change.” – David Hone

The impacts of climate change:

Solutions
We discussed many different solutions and our conclusion was that we cannot keep adding emitting CO2 at the current levels. It is vital for each one of us as individuals to take responsibility to reduce our own carbon footprint at home and in our businesses. But for us to be truly successful in mitigating the impacts of climate change and global warming then we must demand that governments, corporations and policy makers begin to implement the following seven steps.

My aim was to go to Antarctica to listen to Antarctica’s message, collaborate and then bring back what I learned to share and inspire others. I hope I have increased your knowledge of climate change and its impacts. My plea now is that you feel inspired to change your daily habits and become a sustainable champion in your home life and work life. #climateforce
Each of us was gifted a Zayed solar light, and from Antarctica we created a solar light message to share with the world. With Earth Day just behind us, I hope you can embrace this message and be the change. 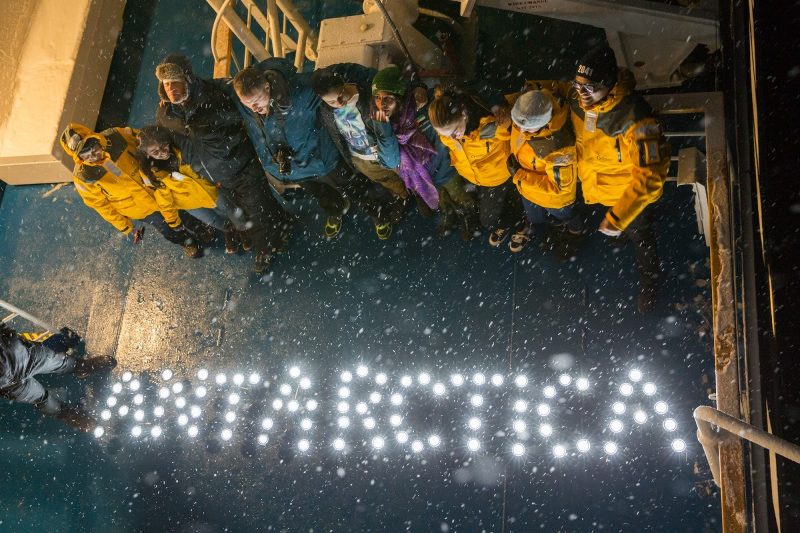 Blog posts from my time in Antarctica and specific solutions linked to the seven steps on an individual level can be found at www.ecoannie.blog