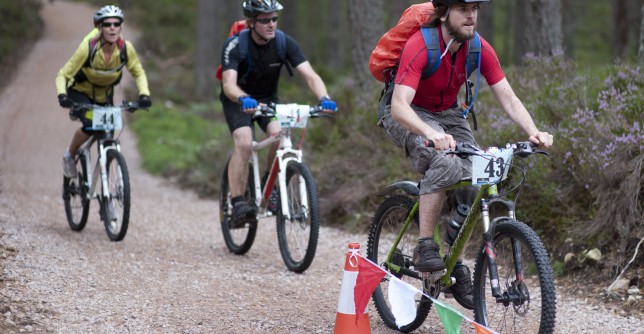 The much anticipated 4th Cairngorm Challenge was delivered on Saturday 11th September and has received wide spread acclaim from the teams that took part in this multi-route duathlon epic.

Introduced for the first year was the extended 100km gold route which stretched and tested the hardiest of teams. Serial adventure challenger and all round hard man Gordon Fraser from Anatom remarked

“The Gold course is very tough, as it should be and having done quite a few of these types of events in the past, can be promoted as a pretty gruelling challenge that should attract some elite athletes for such a great cause”.

“The 100k gold route was terrific this year and the additional 20k on last year’s event made it a challenge worth coming back for. The combination of mixed terrain under foot and on the bike, along with the incredible distance creates a great all round challenge.”

“I took a week off from cycling after the event because my legs were so stiff, but before the week was out I wanted to do it again!”

What ever the route, what ever the time, everyone was challenged and seemed to have an amazing time as Richard Cullen and Graham Durns testify:

While Graham on the Silver route states “Certainly a challenge but well worth it! Completed the silver in just over 9 hours looking forward to returning next year to go for the gold”

The unique figure 8 format sees teams start, change to bike and finish from the same central Hub with the three routes radiating across 264 sq km that take in some of the most spectacular scenery Scotland has on offer. Climbing 4000ft up Cairngorm Mountain on foot before jumping on a bike and traversing Rothiemurchus, Pityoulish, Abernethy and Glenmore the challenge is breathtaking in every regard.

If you think your team are in need of a bit of team building like the above course, we can organise the whole event for you.

Plans are already under way for 2011 so watch this space for more information. If your interested in finding out about 2011, then email usand we will send you the info just as soon as its ready.