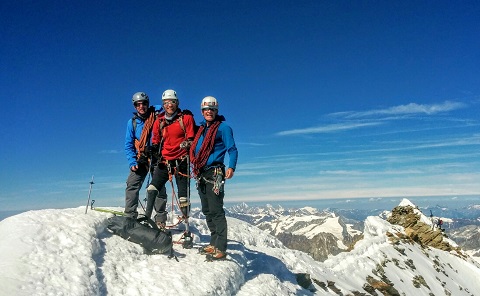 Jamie Andrew is the incredible Scottish mountaineer who, despite having no hands and feet, has made some amazing ascents all over the world. As a quadruple amputee, Jamie has also made many other remarkable achievements, raising many thousands of pounds for charity along the way. Jamie has also supported a number of charity challenge events managed by Maximillion, including this year’s Pentland Push for St Columba’s Hospice, the Tesco Bank Four Abbeys Challenge and the Barnardos Scotland Cairngorm Challenge.

On the back of his groundbreaking conquest of the Matterhorn in August 2016 – the first quadruple amputee to have done so – we invited Jamie to share his experience and draw some key messages from it.

If there’s one thing that climbing in the mountains has taught me, it’s the virtue of patience. Edward Whymper, summed this up, following his disastrous first ascent of The Matterhorn, with the immortal lines, “Climb if you will, but remember that courage and strength are naught without prudence, and that a momentary negligence may destroy the happiness of a lifetime. Do nothing in haste, look well to each step, and from the beginning think what may be the end.”
My own Matterhorn journey began about five years ago. By then I had been climbing mountains without hands and feet for over a decade, breaking barriers with every step. But to climb The Matterhorn, that most iconic, difficult and notorious of Alpine peaks, was way beyond what I imagined was possible for me. But then one day, whilst skiing in another part of Switzerland, a glimpse of that unlikely peak glinting in the far distance like an uncut diamond, caused a spark of an idea to form in my head. And that spark somehow caught in my brain and began to grow, until before I knew it, it had become a full burning dream.
Well now that I had a dream, I knew exactly what to do. I just had to work towards it one goal at a time. It never ceases to amaze me how, simply by setting myself small targets, plugging away step by step, I can eventually reach even my most distant objectives.
However my progression to the summit of The Matterhorn did not prove straightforward. It was set back by a tragedy when the friend with whom I intended to climb was killed in an accident on Mont Blanc. I almost called the whole thing off. But still I could not let the mountain go. One year later, in perfect conditions and with a film crew in tow, I made excellent progress up the difficult Hornli Ridge, only to be thwarted just 250m below the summit due to lack of time. Turning around and retreating from the upper reaches of the mountain, having put in such a huge effort, was one of the hardest decisions of my life. But with the possibility of thunderstorms arriving, and on my mind the cautionary words of Ed Viesturs, “It’s a round trip. Getting to the summit is optional, getting down is mandatory.” I knew it was the right decision to make.
The following year I was back in The Alps again, but the weather didn’t play ball. And the next year again provided me with no opportunity to set foot on the mountain. I began to feel disheartened. However I decided to give it one last shot. And this time all the pieces just fell into place. After all the planning, preparation and training the climb went like a dream. Setting out at 5am, I was astonished and elated when just 6 hours later I set my carbon fibre feet onto that tiny summit crest of snow and rock, above all things.
Patience paid off. So that is one of the key messages I want to put across to the business audiences I speak to this year. We may be in uncertain political and economic times, and we have certainly come into the habit of expecting instant results in everything we do. But some victories do not come straight away – they take time, effort, trust, persistence and diligence. And for all that, these achievements are so much the better.

Find out more about Jamie on http://www.jamieandrew.com/