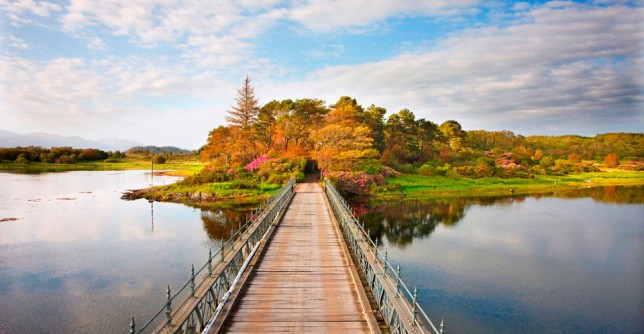 The United Kingdom occupies the British Isles and it’s no accident that we are required from time to time to deliver an event on an island. We love islands! They spark the romantic imagination and spirit of adventure with all the logistical challenges of how to get on and off, constrained by ferries and weather. It doesn’t take much to come up with a list of classic island novels which must include Treasure Island, Robinson Crusoe and Lord of the Flies. More recently we will all surely have seen Castaway with Tom Hanks, The Beach with Leonardo Di Caprio and The Wickerman (the original of course), with Edward Woodward, set on the Summer Isles.

Maximillion’s own Island Adventures has been recently added to with Bandeoke for a client of Events Ecosse on the Isle of Eriska in June. Eriska, not to be confused with Eriskay in the Outer Hebrides of Whisky Galore fame is a tiny island on the west coast of Argyll. Despite its diminutive proportions, the island boasts a magnificent Victorian baronial mansion, now a Relais & Chateaux property complete with its own golf course and spa.

Eriska is our seventh island adventure, preceeded by:

Isle of Man: Famous for the TT race, tailless cats and The Bee Gees.  Maximillion travelled to this Crown Dependency to delivery a series of three events for Manx Telecom, each using Maelstrom.

Benbecula: This island forms part of the chain collectively called the Outer Hebrides, and you don’t get much remoter than this! A Family Fun Day for over 300 employees of defence technology multinational.

Isle of Wight: We had a lot of fun creating a Caribbean Themed party during Cowes Week for Mount Gay Rum (distilled in Barbados). Ten tons of sand, palm trees, beach huts and lots of props developed into a slight security issue as they attracted the attention of trophy hunters!

Inchcolm Island: A fascinating island on the Firth of Forth boasting a 12th Century Augustinian abbey at one end and an extensive World War Two artillery battery at the other. We landed on the island in 2002 with an elaborate themed treasure hunt for YPO (Young President’s Organisation) casting Bonnie Prince Charlie, Flora Macdonald and some nasty Red Coats!

Skye: The aforementioned Flora Macdonald gave refuge to the fugitive Prince three hundred years ago on this iconic island and thereby cast in stone Skye’s romantic place in Scottish history. Maximillion’s more humble contribution involved the theming of a hotel for a relaunch.

If the choice were ours, where would we go for our eighth island adventure?  Anywhere in the Pacific, obviously!

Maximillion organises conference and live events in Edinburgh, Scotland and across the UK. If you would like additional information, please call us on 0845 901 1422 or complete an on-line enquiry form.