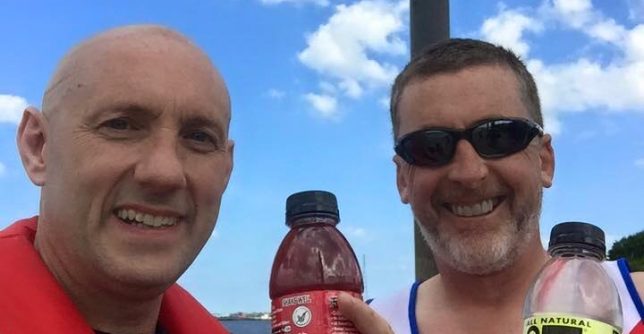 We are delighted to congratulate our very own Lead Facilitator, Mike Tierney on rowing across the North Sea in memory of his sister Clare.

“When I lost my wonderful sister to breast cancer I wanted to raise money in her memory for the charities for which she cared so much and who had looked after her and our family so well when she was poorly. In the past I have parachuted, cycled and ran for charity but this time I wanted to do something different that would grab peoples’ attention and imagination.”

My sister was a huge football fan (and one of the first ladies ever to qualify as an FA referee) it was her wish that all donations at her funeral went to the Sir Bobby Robson Foundation (SBRF).  This was not only because of the incredible work that the SBRF does to support the research required to improve the detection and treatment of cancer but also because of the enormous respect and admiration that Clare had for a local, sporting legend from her beloved North East. I wanted to support the organisations who helped Clare and our family in her last days – Marie Curie Cancer Care and Macmillan. I also have sense of mission as a former Army officer to never pass the chance to assist former colleagues in need and therefore also look to raise funds for SSAFA who offer practical, emotional and financial support to service personnel, veterans and their families.”

“After numerous set-backs in terms of partners dropping out and unfavourable weather for 2 years, I was nervous that I had taken on too much and the expedition may have to be scrapped. I had many sleepless nights over this. At no time on the actual challenge was I nervous as the boat handles even the biggest seas safely!”

“The boat was named Bonnie Lass in my sister Clare’s memory. Bonnie Lass is a Geordie term of endearment for a great girl and that is what she was.”

“I had never rowed before taking on this challenge. Since training started in Jan 2015 I reckon I have rowed over 10 million meters on rowing machines in my garage and in the gym.  Some mornings this meant getting up at 4am to do a couple of hours before going to work.  At peak I was training for 20 hours per week.”

“We were so tired the celebrations were quite subdued.  I think we managed a meal and two beers before we collapsed into our beds.”

“There was a fantastic restaurant in Ijmuiden marina which served up a huge rack of ribs and ‘bucket of fries’.  We were all so hungry as we had been terribly seasick and found it hard to keep any food down at all.  It has been calculated that we were burning 8000 calories per day whilst rowing 16 hours a day.”

“I have no plans!  The planning, training and preparation for this expedition has been a huge feature in my life for the last 3 years and my family have paid a price for this.  I need to redress this balance before I think of planning anything else.  However, having said that……”

“I would pick another stretch of water to cross.  In all honesty, I underestimated just how difficult it would be to get a suitable weather window for a safe crossing of the North Sea.  The amount of traffic and oil installations etc. mean that unlike in the Atlantic whereby you can rest at sea anchor when the weather turns against you, you have to be able to row and steer the boat at all times or risk collision.  I found the North Sea weather patterns to be hugely frustrating and believed there was some cosmic conspiracy trying to stop the expedition!”

Mike is still trying to reach his £20k target and if you would like to support him and his efforts please donate here!