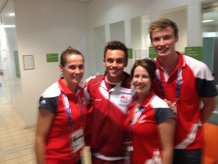 Maximillion’s Director of Ops Sarah had the pleasure of being selected to be one of the many ‘Clydesider’ volunteer helpers at the 2014 Commonwealth Games in Glasgow – albeit based in Edinburgh at the Royal Commonwealth Pool, where the diving competition was taking place!

What made you get involved with the Commonwealth Games?

How was the selection / induction process?

What was your role?

How many volunteers were there in total?

Did you see anyone slip poolside?

Did you manage to meet anyone famous?

Describe the atmosphere in 3 words:

What was a highlight for you?

If you could compete in any Commonwealth event what would it be?

Will you ever wear the tracksuit again?