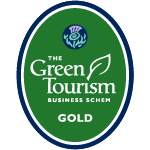 Maximillion are delighted to have secured our fourth consecutive Gold Award from GTBS.

Maximillion joined the Green Tourism Business Scheme in 2007 when we were accredited with the Silver Award. After moving to our current offices in 2008, we were re-accredited and received the Gold Award. Accreditation has been carried out every two years since and we are proud to have retained our Gold Award in 2010, 2012 and now in 2015.

Our most recent sustainable achievement came at the end of 2014 when we become a “carbon positive” business. That is to say, that we reduced the carbon footprint to less than five tons p.a. and are now a net energy contributor through our power produced by our 144 solar panels. The GTBS auditor said in their report “This site has also undertaken a carbon study and has been deemed carbon positive, a fantastic effort from the team within the office.”