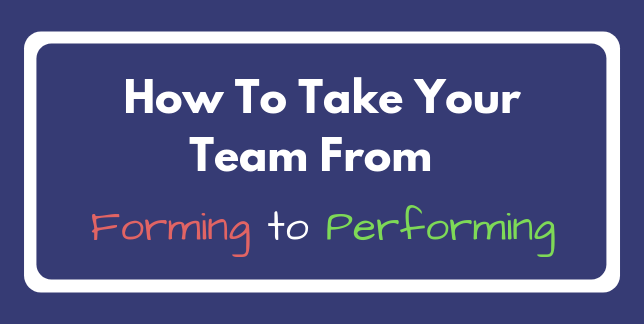 Bruce Tuckman created his famous Forming, Storming Norming and Performing model in 1965. It was used to best describe the stages of team development or the path to success. He later added the fifth stage of adjourning which is sometimes known as mourning.

His stages provide an easy way to understand how groups change and develop. It is easily applicable to teams in the workplace and for this reason, it is often used in human resource development.

The forming stage begins when the team first meet each other. In the first instance, they’re likely to share information about themselves such as their background, experience and interests. During the interaction, they will begin to form impressions of each other.

During the forming stage, a team will begin to understand the task they’ll be working on and what role they’ll play within the team. This stage is like any new experience, they’re forming impressions, opinions and just generally getting to know each other.

At this stage, the team is essentially a group of people that are thinking about the project and also how they’ll fit in. It’s a promising start if they’re bonding over Netflix shows they watch, favourite artists and things they enjoy in life as this will help accelerate them to the next stage.

How can you help a forming team?

It’s important to have some structure to the task at hand during this stage. Doing this ensures that everyone involved knows exactly what they’re doing and that no one is left out. At this initial stage of growth, the team will need a leader to guide them in the right direction. Be mindful not to overwhelm them and let the small talk happen.

Storming occurs when the honeymoon phase is over, the workload has increased and things aren’t feeling new and exciting like they used to. The storming phase is unavoidable, it happens to all teams that have been working together for a while.

It’s not unusual that people within the team will start to compete for status and acceptance during the storming stage. Team members may begin to express their opinions on how things should be done and this is where conflict can start. People work in different ways and some people may feel as though the team’s goal is not aligning with them.

Storming can also happen at stages where team members feel:

The bad news is, even if you get through the storming stage now, your team may revisit this stage when major conflicts happen during a later stage. The focus will be less on the project if storming is revisited and more about trying to positively shift them all back to a more productive stage.

How can you help a Storming Team?

How you can help a storming team really does depend on the type of conflict. It helps if you can try and be a mediator between members of the team. Ensuring the team know why the conflict has happened and what they can do to resolve it is critical.

Often conflict can make a team stronger if they can all understand each other’s point of view as well as the frustrations. However, if there is a team member that is having a negative effect on the team, it may be worth digging deeper into why this individual is acting this way.

Your team will move into the norming stage where they begin to work more effectively together as a team. Individuals have moved away from only pursuing their personal goals and are focused on developing as a team. This usually involves improving or creating processes and procedures that productively contribute towards fulfilling the tasks at hand.

Your team know how to resolve conflict, they’ve established team rules and know exactly what tools and procedures they need to follow in order to complete their tasks.  Your team trust each other and turn to each other for advice and assistance in reaching mutual goals. You may notice that your team are making significant progress since they’ve started to successfully work together. Instead of conflicting with each other as they did in the storming stage, they now complement each other.

How can you help a Norming team?

Now your team has hit the norming stage, it’s time for the team leader or manager to take a step back. This means taking the back seat when it comes to decision making and problem-solving activities as they are now ready to take on this extra responsibility. They may still need a leader or manager to step into situations where encouragement or help is needed. Now there is less involvement from the manager, you can view your team from a few feet back and ensure they are working collaboratively.

Congratulations, your team have reached their peak productivity. A performing team is a team that is functioning at a high level in terms of performance and growth. Everyone is focused on reaching goals as a team. They trust and rely on each other and are on their way to success.

Team members are confident, motivated and can, therefore, operate without any supervision. Each individual is accelerating in their role and together they are driving full speed ahead. If a change needs to be made or a disagreement occurs, a performing team will overcome it together without the need for a manager or team leader.

Not all team members will make it to this stage and not all teams will either. To reach this stage the team dynamics would have to be strong to ensure productivity could happen. Team members have and will challenge each other, but instead of this being a negative, they will see it as constructive feedback that pushes them towards further success.

How can you help a Performing team?

A team leader or manager will continue to monitor the progress of the team and ensure achievements are recognised and celebrated. A manager/team leader will still be making top-level decisions to ensure there is an appropriate structure for a performing team.

It’s likely that a performing team will revert back to another stage. If a new team member joins them, the team could revert back to forming while they readjust. It’s important for a leader or manager to step in if there is a change to the team to ensure they are being guided back to success.

The adjourning stage occurs when the project is coming to an end and the team are moving off into different directions. The team may feel as sad that they are going separate ways as they have likely become close and may have grown accustomed to the experience and environment that they created together.

The leader/manager should be celebrating the success of the project with the team at the adjourning stage.