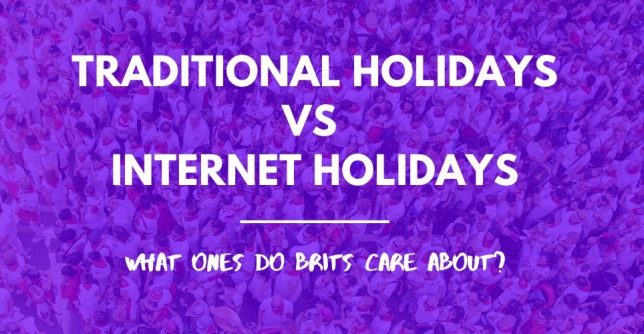 There are many holidays and national events in the UK, some have been around for centuries, some are public holidays and others are just days of celebration. Some of these will always fall on a specific date whilst others will fall at a point within a particular month.

More recently, the internet has driven a new set of holidays such as National Dog Day and National Pizza Day. Rather different from the traditional holidays we’re used to that often have a religious or historical meaning to them.

We used Google data to reveal how much Brits still care about traditional holidays compared to recent internet holidays.

Turns out, Brits love the ancient celebration used to ward off ghosts the most. Halloween has the highest average monthly searches and interest in Halloween only grows stronger. The number of searches has doubled within the past two years alone. Spooky, right.

Brits cherish Mother’s and Father’s day less than half the amount of Halloween. Although they have the same amount of monthly searches on average, Mother’s day does receive a higher search volume month on month. But, this may not be the case for much longer. Searches for Father’s day have doubled since 2017, whereas searches for Mother’s day has declined by 40%. What did UK mother’s do to deserve this?

Chinese New Year is, of course, not a UK tradition but average monthly searches stand at 673,000. Chinese new year received more searches than traditional UK holidays such as St.Patrick’s day. Some may say this is a positive sign that the United Kingdom is becoming increasingly open to celebrating other cultures.

The first important thing to mention here is that 40% of the top internet holidays are related to our pets. Studies have previously revealed that Brits love their pets more than their partners. This data reveals that we even love our pets more than our own family. Back in 2017 National Siblings Day received the highest amount of searches, but dogs quickly took over and National Siblings day saw a 27% decline.

National pizza day had a strong year but fewer people wanted a slice, which meant interest declined by nearly 30%.

Galentines was invented by Amy Poehler’s character on the show Parks and Recreation back in 2010. On February 13th, you’re supposed to grab brunch with your girlfriends. No one anticipated that this holiday would take off as much as it did, but 9 years later Galentines is a real thing. So much of a thing that in the past 2 years searches have increased by nearly 170%.

I know what you’re thinking, what about the crazy cat lovers? Turns out their not as crazy as everyone made out. Compared to national dog day, National cat day has half the searches and it also experienced a decline of 13% in searches. Maybe it was the dog lovers that said the cat lovers were crazy?

Is Interest in Traditional Holidays Dying?

If Galentine’s day continues to increase at the rate it has been the past 2 years, average monthly searches will stand at 224,550. This means it will gain more searches than Christmas day, Pancake day and Summer Solstice if they also follow their search trend.

Interest Chinese New year is already higher than some UK holidays. But, in two years time, mother’s day in it’s declining state may have fewer searches than valentines day. Chinese New year could also be our 5th most popular annual holiday.

Below you can see a table that outlines the complete data set and also the % of increase of decrease the holidays has experienced.

We used the Festival, holidays & events guide to identify UK traditional holidays and used Google Keyword Planner monthly searches to work out which were most popular. We then used the Social Media Calendar of 2019 to identify popular internet holidays and followed the same process to reveal the top 10.

We used Google Keyword Planner to identify monthly search data from August 2017- August 2019 for the top 10 traditional and internet holidays. Using this data we were also able to work out the percentage at which the holiday was increasing or declining based on the search difference between 2017 & 2019.